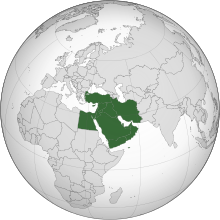 For many years, Muslims have been complaining about Middle East dictators and politics. The Bush administration has taken a bold move toward democratizing and cleaning up the Middle East. No other president has had the courage to take that first step. Isn’t it about time?

At almost any immigrant Muslim gathering in the US, you hear Muslims complaining about the Middle East. They complain about the politics, the economics, the atmosphere, the oppression, the persecution, and the leadership. It’s time for Muslims to stand up and thank president Bush for starting the Middle East clean up process.

Previous presidents have not had the courage and wherewithal to clean up the Middle East. Even Bush Senior eventual backed out of a clean up process after the Gulf War. This Bush, however, got the process rolling and did not back out. Muslims need to support and congratulate president Bush on his courage and vision.

I have had the opportunity to speak to many Iraqis that are here for medical treatment and or other reasons and they all like what they see and they have all said that things are improving and that the standard of living has risen tremendously.

I remember treating a man for a major finger infection at a hospital in Detroit. He was flying in to visit family and his finger became infected and very painful while he was on the plane. They took him straight to the hospital and we began treatment. I was curious and asked him his story. He is a worker that works for some type of company in Iraq and the company that they work for gave them all free cell phones and there was a bidding war to who can provide his company the best cellular service and cheapest phones.

He explained to me how much improvement they have seen. Electricity is everywhere, no longer has periods of down time. The water is cleaner and all kinds of infrastructural upgrades have been made. When I asked him if it was better under Saddam or now, he said, “It’s a hundred times better now.”

We have all seen what happened to Japan and Germany after World War II. Japan is now the second largest economy in the world and is a leader. Germany is also in the top 5 and is one of the most advanced countries in Europe. Many analysts are predicting a similar resurrection for Iraq, and eventually the entire Middle East.

It may take 20 years or more, but the Middle East will be better off under a democracy and a government that empowers it’s people. Muslims all around the world should be watching closely, learning from the Iraq experiment, and replicating it’s success. It’s time to support the Iraq project, rather than criticize it.