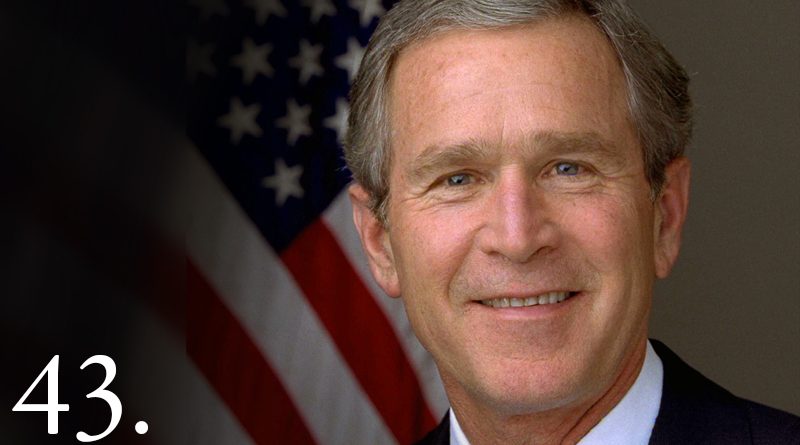 More than any other American President, President George Bush has made more comments about Islam than any other president. Here is yet another compilation of the President’s quotes on Islam. Add this to your collection when you have to debate Muslims that favor Democrats. What have Democratic administrations ever said?
PRESIDENT BUSH’S QUOTES ON ISLAM

In the President’s Words: Respecting Islam

The United States is a nation dedicated to religious tolerance and freedom, and President Bush has acted to ensure that the world’s Muslims know that America appreciates and celebrates the traditions of Islam.

“Here in the United States our Muslim citizens are making many contributions in business, science and law, medicine and education, and in other fields. Muslim members of our Armed Forces and of my administration are serving their fellow Americans with distinction, upholding our nation’s ideals of liberty and justice in a world at peace.”
Remarks by the President on Eid Al-Fitr
The Islamic Center of Washington, D.C.
December 5, 2002

“Over the past month, Muslims have fasted, taking no food or water during daylight hours, in order to refocus their minds on faith and redirect their hearts to charity. Muslims worldwide have stretched out a hand of mercy to those in need. Charity tables at which the poor can break their fast line the streets of cities and towns. And gifts of food and clothing and money are distributed to ensure that all share in God’s abundance. Muslims often invite members of other families to their evening iftar meals, demonstrating a spirit of tolerance.”
Remarks by the President on Eid Al-Fitr
The Islamic Center of Washington, D.C.
December 5, 2002

“America treasures the relationship we have with our many Muslim friends, and we respect the vibrant faith of Islam which inspires countless individuals to lead lives of honesty, integrity, and morality. This year, may Eid also be a time in which we recognize the values of progress, pluralism, and acceptance that bind us together as a Nation and a global community. By working together to advance mutual understanding, we point the way to a brighter future for all.”
Presidential Message Eid al-Fitr
December 5, 2002

“Islam brings hope and comfort to millions of people in my country, and to more than a billion people worldwide. Ramadan is also an occasion to remember that Islam gave birth to a rich civilization of learning that has benefited mankind.”
President’s Eid al-Fitr Greeting to Muslims around the World
December 4, 2002

“Ours is a war not against a religion, not against the Muslim faith. But ours is a war against individuals who absolutely hate what America stands for, and hate the freedom of the Czech Republic. And therefore, we must work together to defend ourselves. And by remaining strong and united and tough, we’ll prevail.”
Press Conference by President Bush and President Havel of Czech Republic
Prague Castle, Prague, Czech Republic
November 20, 2002

“Some of the comments that have been uttered about Islam do not reflect the sentiments of my government or the sentiments of most Americans. Islam, as practiced by the vast majority of people, is a peaceful religion, a religion that respects others. Ours is a country based upon tolerance and we welcome people of all faiths in America.”
Remarks by President George W. Bush in a statement to reporters during a meeting with U.N. Secretary General Kofi Annan
The Oval Office, Washington, DC
November 13, 2002

“We see in Islam a religion that traces its origins back to God’s call on Abraham. We share your belief in God’s justice, and your insistence on man’s moral responsibility. We thank the many Muslim nations who stand with us against terror. Nations that are often victims of terror, themselves.”
President Hosts Iftaar Dinner
Remarks by the President at Iftaar Dinner
State Dining Room

“Islam is a vibrant faith. Millions of our fellow citizens are Muslim. We respect the faith. We honor its traditions. Our enemy does not. Our enemy doesn’t follow the great traditions of Islam. They’ve hijacked a great religion.”
Remarks by President George W. Bush on U.S. Humanitarian Aid to Afghanistan
Presidential Hall, Dwight David Eisenhower Executive Office Building, Washington, D.C.
October 11, 2002

“Islam is a faith that brings comfort to people. It inspires them to lead lives based on honesty, and justice, and compassion.”
Remarks by President George W. Bush on U.S. Humanitarian Aid to Afghanistan
Presidential Hall, Dwight David Eisenhower Executive Office Building, Washington, D.C.
October 11, 2002

“All Americans must recognize that the face of terror is not the true faith — face of Islam. Islam is a faith that brings comfort to a billion people around the world. It’s a faith that has made brothers and sisters of every race. It’s a faith based upon love, not hate.”
President George W. Bush Holds Roundtable with Arab and Muslim-American Leaders
Afghanistan Embassy, Washington, D.C.
September 10, 2002

“If liberty can blossom in the rocky soil of the West Bank and Gaza, it will inspire millions of men and women around the globe who are equally weary of poverty and oppression, equally entitled to the benefits of democratic government. I have a hope for the people of Muslim countries. Your commitments to morality, and learning, and tolerance led to great historical achievements. And those values are alive in the Islamic world today. You have a rich culture, and you share the aspirations of men and women in every culture. Prosperity and freedom and dignity are not just American hopes, or Western hopes. They are universal, human hopes. And even in the violence and turmoil of the Middle East, America believes those hopes have the power to transform lives and nations.”
President George W. Bush Calls for New Palestinian Leadership
The Rose Garden, Washington, D.C.
June 24, 2002

“When it comes to the common rights and needs of men and women, there is no clash of civilizations. The requirements of freedom apply fully to Africa and Latin America and the entire Islamic world. The peoples of the Islamic nations want and deserve the same freedoms and opportunities as people in every nation. And their governments should listen to their hopes.”
Remarks by the President George W. Bush at the 2002 Graduation Exercise of the United States Military Academy
West Point, New York
June 1, 2002

“America rejects bigotry. We reject every act of hatred against people of Arab background or Muslim faith America values and welcomes peaceful people of all faiths — Christian, Jewish, Muslim, Sikh, Hindu and many others. Every faith is practiced and protected here, because we are one country. Every immigrant can be fully and equally American because we’re one country. Race and color should not divide us, because America is one country.”
President George W. Bush Promotes Compassionate Conservatism
Parkside Hall, San Jose, California
April 30, 2002

“We’re taking action against evil people. Because this great nation of many religions understands, our war is not against Islam, or against faith practiced by the Muslim people. Our war is a war against evil. This is clearly a case of good versus evil, and make no mistake about it — good will prevail.”
Remarks by the President George W. Bush at a Town Hall Meeting with Citizens of Ontario
Ontario Convention Center, Ontario, California
January 5, 2002

“Eid is a time of joy, after a season of fasting and prayer and reflection. Each year, the end of Ramadan means celebration and thanksgiving for millions of Americans. And your joy during this season enriches the life of our great country. This year, Eid is celebrated at the same time as Hanukkah and Advent. So it’s a good time for people of these great faiths, Islam, Judaism and Christianity, to remember how much we have in common: devotion to family, a commitment to care for those in need, a belief in God and His justice, and the hope for peace on earth.”
Remarks by the President in Honor of Eid Al-Fitr
The Diplomatic Reception Room
December 17, 2001

“The teachings of many faiths share much in common. And people of many faiths are united in our commitments to love our families, to protect our children, and to build a more peaceful world. In the coming year, let us resolve to seize opportunities to work together in a spirit of friendship and cooperation. Through our combined efforts, we can end terrorism and rid our civilization of the damaging effects of hatred and intolerance, ultimately achieving a brighter future for all.”
President’s Message for Eid al-Fitr
December 13, 2001

“According to Muslim teachings, God first revealed His word in the Holy Qur’an to the prophet, Muhammad, during the month of Ramadan. That word has guided billions of believers across the centuries, and those believers built a culture of learning and literature and science. All the world continues to benefit from this faith and its achievements.”
Remarks by the President George W. Bush At Iftaar Dinner
The State Dining Room, Washington, D.C.
November 19, 2001

“The Islam that we know is a faith devoted to the worship of one God, as revealed through The Holy Qur’an. It teaches the value and the importance of charity, mercy, and peace.”
President George W. Bush’s Message for Ramadan
November 15, 2001

“This new enemy seeks to destroy our freedom and impose its views. We value life; the terrorists ruthlessly destroy it. We value education; the terrorists do not believe women should be educated or should have health care, or should leave their homes. We value the right to speak our minds; for the terrorists, free expression can be grounds for execution. We respect people of all faiths and welcome the free practice of religion; our enemy wants to dictate how to think and how to worship even to their fellow Muslims.”
President George W. Bush Addresses the Nation
World Congress Center, Atlanta, Georgia
November 8, 2001

“All of us here today understand this: We do not fight Islam, we fight against evil.”
Remarks by President George W. Bush to the Warsaw Conference on Combating Terrorism
November 6, 2001

“I have assured His Majesty that our war is against evil, not against Islam. There are thousands of Muslims who proudly call themselves Americans, and they know what I know — that the Muslim faith is based upon peace and love and compassion. The exact opposite of the teachings of the al Qaeda organization, which is based upon evil and hate and destruction.”
Remarks by President George W. Bush and His Majesty King Abdullah of Jordan
The Oval Office, Washington, D.C.
September 28, 2001

“Americans understand we fight not a religion; ours is not a campaign against the Muslim faith. Ours is a campaign against evil.”
President George W. Bush Remarks by the President to Airline Employees
O’Hare International Airport, Chicago, Illinois
September 27, 2001

“The terrorists are traitors to their own faith, trying, in effect, to hijack Islam itself. The enemy of America is not our many Muslim friends; it is not our many Arab friends. Our enemy is a radical network of terrorists, and every government that supports them.”

“I’ve made it clear, Madam President, that the war against terrorism is not a war against Muslims, nor is it a war against Arabs. It’s a war against evil people who conduct crimes against innocent people.”
Remarks by President George W. Bush and President Megawati of Indonesia
The Oval Office, Washington, D.C.
September 19, 2001

“The face of terror is not the true faith of Islam. That’s not what Islam is all about. Islam is peace. These terrorists don’t represent peace. They represent evil and war.”
Remarks by the President at Islamic Center of Washington, D.C.
Washington, D.C.
September 17, 2001