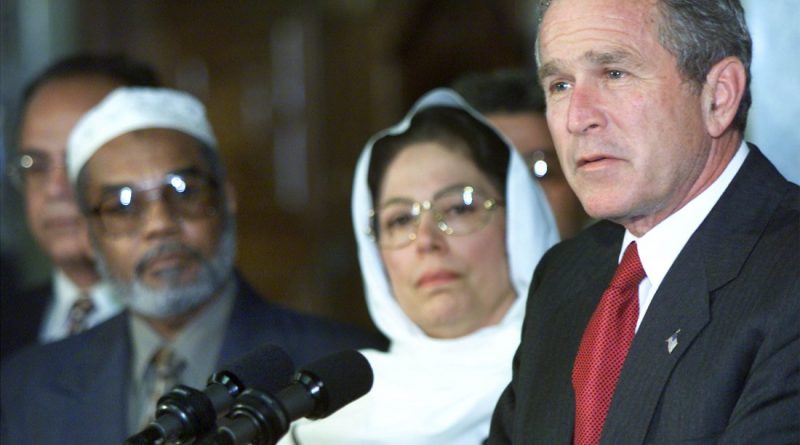 First of all, welcome to all the Muslim Republicans out there that have not been able to find a home online. Day in and day out, we are bombarded by messages from the liberal media telling us why we can’t be Muslim and Republican. We have been shunned by our own Muslim communities in many cases.

Historically, Muslims have always been staunch Republicans and have followed the conservative agenda. Muslims believe in family values, freedom of speech, lowering taxes, and a smaller federal government. We disagree with pornography, pre-marital sex, unbridled abortion, and the deterioration of the moral fabric of our country.

Muslims have been a part of the American culture since the first African slaves were brought over. As time went on, Muslims continually sought refuge and traveled to their adopted homeland, the United States of America. It is estimated that now there are about 7-9 million Muslims living in the United States.

Although, Muslims, as collective group, are politically immature and have not been very active in politics, that seems to be changing. Since 1996 Muslims have begun taking a more active role in politics and in the political process. Although historically there have been Muslims individually involved in political campaigns, as a group, they have only recently gained recognition.

It was Karl Rove, Governor George Bush’s political strategist in 1999 that recognized the large population of Muslim voters and arranged for countless meetings and strategically engineered a dominating Muslim Republican turnout in the 2000 presidential election. Governor Bush reached out to Muslim voters referring to Muslims and Arab Americans in his debates with Al Gore. He had a Muslim woman stand with him on stage dressed in Muslim traditional clothing and attended various Muslim fundraisers to help promote the GOP and his candidacy.

Muslim Republicans began as a small print newsletter that we used to handout in meetings across the Midwest. Later we evolved into an email list of conservative Muslims in the early 1990s that were working on Republican political campaigns, volunteering for candidates, manning phone banks, and sending out mailers. We discussed strategies and the Republican agenda. Eventually, it became clear that a list serve was not enough. We created a Yahoo group and hosted a little website on various free web hosts. As the years went by, and the Kerry versus Bush election came up, Muslim Republicans found themselves to be among the minority. Virtually, 80% of Muslims had pre-determined that they will be voting for anything but Bush.

Muslim Republicans double their efforts and began a huge email and internet campaign to try and bring Muslims back to the GOP. We may have converted a few, but our efforts were not strong enough and we needed to do more.

At this time we witnessed MuslimsForBush.com garner a lot of support and publicity for Muslims supporting the Bush campaign. We saw how much they were able to accomlish in a few short months. We knew that MuslimsForBush.com did not have any long term aspirations, the name gave that away. So shortly thereafter, we decided that it was time.

In early 2006, it was decided that it was time for Muslim Republicans to get a full fledged website with all the functionality of a full website. MuslimRepublicans.com was born and the rest is history.

As time went on, the country’s demographics have changed and so have Muslim voter’s allegiances, with many Muslim voters abandoning the GOP for a more inclusive Democratic party. We still find this trend today, however, there are still many loyal Muslim Republicans.

We’ve been around the longest. Sure, every 4 years you see a surge of Muslims for Bush or Muslims for McCain, Romney, Trump. But those groups fizzle out and disappear as time goes on. We are the only group that’s been around for decades and have not wavered. We offer intelligent, unbiased opinions and views and are not always in support of the direction of the GOP nor it’s candidates. We support conservative ideals, but will not stand for bigotry, discrimination, and marginalization of minorities. That’s not who we are. That’s not who the Republican party should be.

Enjoy our website, peruse our articles, engage in discussions, exchange ideas and find out who else is a Republican Muslim.