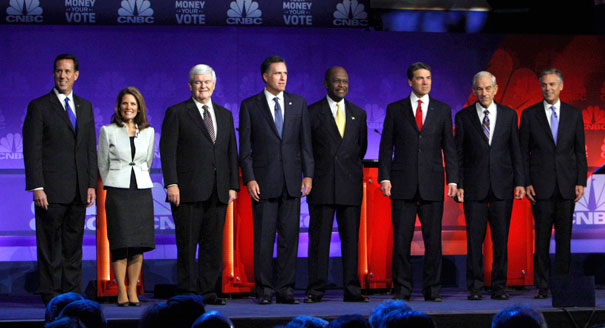 Where do the Republican candidates stand on Islam and Muslims? That is the question that we are asked most often by Muslims, non-Muslims, the media, and just about everyone. The GOP and the Republican inner circle has regressed from Karl Rove and George W. Bush’s progressive stances and Muslim-friendly speeches and quotes. Bush was the most Muslim friendly president in US history, but his later years weren’t so kind to Islam and Muslims (at least that’s how most Muslims viewed it) and many Muslims wandered over to the Democratic party.

So where do the 2012 candidates stand? Unfortunately, the answer isn’t always easy to find, but we have tried to piece together as much information as possible.

Of all the candidates left in the republican race, Santorum is the least polished and most immature one. He lacks the smoothness of the others, but he is still new at this and isn’t used to having every word analyzed and criticized. Welcome to the big game, Rick.

Rick Santorum was at a recent event saying that, “Where do you think this concept of equality comes from? It doesn’t come from Islam. It doesn’t come from the East and Eastern religions…It comes from the God of Abraham, Isaac and Jacob, that’s where it comes from.” He later goes on to bash “Allah”. It’s sad that he doesn’t realize that Christians in the Middle East pray to “Allah” and use this word extensively during Sunday Mass and Sermons. The word “Allah” is the Arabic word for God. Millions of Arab Christians pray to Allah every day.

He was at another event in Coral Springs, Florida where he was asked why he demonizes Muslims, he responded that he only talks about “Radical Islam”, the person asking the question corrected him saying that, “No you always talk about all of Islam and you have offended American Muslims”. Santorum responded, “Oh yes, I have made comments about Islam” and ran off without answering anymore questions.

Santorum’s staffers have repeatedly told reporters that Barack Obama is Muslim and has “Radical Islamic Policies”. But later apologized for this “slip”.

Santorum in most of his debates did use the term “Radical Islam”, but he should have stuck with the “war on terrorism”. Instead he said, “We are not at war with terrorists, we are at war with radical Islam.” Take that statement however you’d like. But perpetual Muslim-hater, Ann Coulter, agrees with Santorum, that should tell you all you need to know.

He has also stated that he supports Muslims being profiled in airports and by the FBI. And he has also made statements saying that the United States is at war with, and should invade the “Islamic Republic”. He is referring to Iran, but keeps calling it the “Islamic Republic”. We aren’t sure which research intern advised him to use that terminology. But he needs a more grownup staff.

He also goes on to repeat the tried and true childish argument that “they hate us because of who we are. They hate freedom.” It’s sad that such a highly educated individual uses arguments based on pre-school playground logic and not actual facts and intelligence.

We doubt he will win the nomination, he needs a lot more polish, and he needs a real Republican strategist, that understand Islam and Muslims. No one has won the White House without Ohio. And no one has won Ohio without the Muslim vote in Ohio.

Mitt Romney is slightly better. His preferred code word is “militant Islam” or “jihadists”. He has referred to militant Islam and jihadists on countless occasions and is willing to vilify Muslims for no apparent reason. When being asked about oil producing countries, he refers to them as “jihadist regimes”, rather than their proper names. Which is quite bizarre.

We will give him credit, on most occasions his statements are more measured and appropriate. He usually says, “We recognize that people of all faiths are welcome in this country. Our nation was founded on a principle of religious tolerance. That’s in fact why some of the earliest patriots came to this country and why we treat people with respect, regardless of their religious persuasion.” He has also stated that. “Islam is not an inherently violent faith.” Welcome to the new century Mr. Romney. No faith is “inherently” violent. God wouldn’t send such a faith.

Countless YouTube videos have him giving speeches trying to demagogue and scare his audiences about Islam. He compares Islam to Communism, Nazism, and other horrendous plagues that have afflicted humanity. It’s rather sad that we have to stoop this low to pander to the extreme right (who are usually people in Tennessee with one tooth total for the entire family and the education of a mouse).

At a talk in Detroit, Romney was asked by some anti-Muslim nutjob in the audience why he doesn’t hate Muslims. Romney’s response was measured and appropriate, saying “Radical, violent Islamists pose a threat to Americans and others around the world. However, he said, “they take a very different view of Islam than the Muslims I know.” He noted that he was raised in Detroit, which has a large Muslim population. “They are peace-loving and America-loving individuals. I believe that very sincerely. I believe people of the Islamic faith do not have to subscribe to the idea of radical, violent jihadism.” Pretty normal, right?

So is Romney just flip-flopping? Who knows? But he does know how to pander to various crowds. But we ultimately think that it is this polish that will lead him to ultimately be the nominee. And in fact, being someone who flip-flops on many issues is a positive when running for president, you stand for everything and anything, and you are willing to change your mind. Perfect!

Newt is perhaps the most bizarre candidate running on the Republican ticket. Why anyone even considers him a viable candidate is completely inexplicable. He is polished, he can wax poetic about foreign policy, taxes, abortion, gays, and all sorts of issues. What he lacks is credibility and family values. He has had more affairs than anyone can account for, and most of them bizarre and preposterous. At age 16 he was sleeping with his geometry teacher, who later became his first wife. He has cheated on all his wives and has had multiple affairs and criticizes others on family values. See this for more on Newt Ginrich’s Affairs.

When asked about religious tolerance and respecting other religions, Gingrich says, “Now, I think we need to have a government that respects our religion. I’m a little bit tired about respecting every religion on the planet. I’d like them to respect our religion.” He later goes on to demonize Islam and Muslims and compares building a Mosque in New York to building Nazi buildings near the Holocaust museum. He has also suggested that the United States government should not allow Muslims to build mosques, citing that Saudi doesn’t allow Churches. Besides the fact that this is completely untrue, he wants us to violate the United States constitution in order to mimic a dictatorial, authoritarian, and insane regime? Sometimes, you wonder if he really knows what he is saying, or he is just full of so much hate that he will think that saying these things is normal.

Newt was never like this before. He is pandering to the ignorant masses on the right. Newt has been involved with the American Muslim community his entire life and has supported Islamic finance and shariah compliant banking contracts as well as many other pro-Muslim stances, When in Congress he supported a quiet room on Capitol Hill for Muslim congressional staffers to pray their Friday prayers. Do we really believe this insane shift in thought?

No one with half a brain could possibly believe what Gingrich is saying, but he is pandering to the masses and garnering some support. He is un-electable as president, so he won’t really matter in the end. But it is sad to watch one of the most vocal supporters of Islam and Muslims become such a mindless mouthpiece of hate and vitriol.

Ron Paul has made statement after statement telling people that terrorists are terrorist. It doesn’t matter what religion they say they are. He echoes a lot of the maturity and vision of George W. Bush’s statements on Islam and Muslims. He criticizes those that demagogue Muslims, Islam, and Mosques. He sounds the most presidential. Obama would lose to him. Or at least, Paul is the only candidate that could actually challenge Obama.

He stands against hate and Islamophobia and has condemned this on multiple occasions. Ron Paul says that America should not fear Islam and we should just embrace people of all faiths. He sounds the most George Bushesque of the bunch so far.

He probably won’t be the nominee this year, but he has brought a lot of issues to light. You’d think in a year where the incumbent Obama seems unbeatable, that Republicans would go all in with a guy like Paul, who is a stark contrast to the other candidates. But, that won’t happen.

Does it really matter?

When the candidates are finally whittled down to the final nominee, all of this Islamophobia and bizarre hateful speech will come to an end. The nominee will have to move to the center, and hateful speech will not buy you any votes. It’s also important to note that the state of Tennessee has a population of 6 million and only 14 of them are qualified to vote. Just ask Al Gore who that went.

It’s also certain that the nominee will hire a Muslim consultant to help him answer all of these bizarre questions and repair the damage that is done with the Muslim Republican community. We are sure of it. Every presidential candidate since Karl Rove ran’s Bush’s campaign has done so. So will the 2012 Republican nominee.